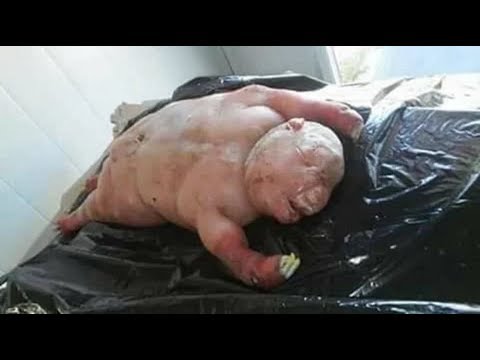 10. The photograph above has to be one of the most frightening creatures on this entire list. It was born to a lamb in South Africa. Yeah, that’s right — this is supposed to be a baby lamb! The creature’s birth immediately sparked rumors of bestiality with claims that the farmer is the one who had impregnated the sheep! Of course, cross species breeding isn’t possible for two animals so different, so those rumors were quickly silenced. It was clear that the baby lamb was born with a variety of deformities, all of which caused it to look so terrifying. Its head looks so large and human-like because of swelling in the brain. Unfortunately, this baby lamb didn’t survive; however, these terrifying images of it will live on in our nightmares for eternity! This is definitely an image we won’t be able to wipe away from our brain!

9. The photograph above is probably the clearest and most recent picture of the Loch Ness monster taken so far with it emerging on the internet in March of 2017. With so many rumors of this sea creature wandering the lake now, it’s become a popular tourist spot with people all over the world visiting, ready with their cameras to capture something spooky to share with the world. The problem that many people have with this particular
photograph is just how close the creature is to the boat. It seems as though the people on the boat would’ve been able to get better evidence of the creature since they were much closer than the people on the hill who took the photograph. This has led many people to believe that the strange thing sticking its head out of the water is nothing more than a tree branch. What do you believe?

8. The photograph above is a still taken from a video that showed this terrifying desert beast stalking its way through the Portugal desert. When it comes to an image like this, a lot of questions pop up right away. What is this beast? It could potentially be an alien hiding in the desert. If that were the case, wouldn’t there be more or some sort of spacecraft? Wouldn’t it also be better at hiding if it had the ability to fly a ship undetected to the Earth? It could also be some sort of desert creature, like bigfoot but with sand. If that were also the case, don’t you think more people would’ve spotted this creature at some point? The desert does seem like an easy place to hide, however, seeing as how everything is the same couple shades of tan. The last option is that it could also be an elaborate hoax, but really, what’s the fun in believing that?

5 Peculiar Revenge Rituals From Around The World | Top 10 Earth