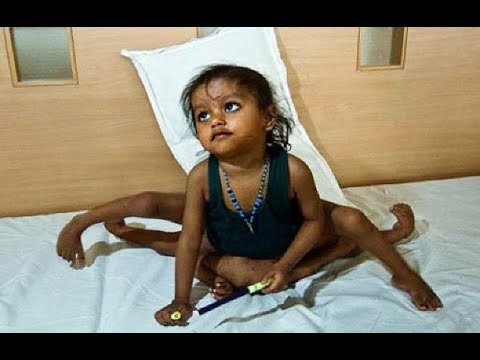 6. Though sometimes we may wish we were born with an extra arm, those who are truly born with extra limbs often wish they were not. Polymelia is a syndrome in which people are born with extra lower limbs. The accessory limbs, as they are called, are often incompletely formed. They do, however, generally have bones and blood in them. This condition, though common in animals, is very rare in humans. There are very few reported cases. There are classifications for polymelia based on the location of the excess limb. In cephalomelia, the extra limb is located on the head, while in notomelia it is attached to the back bone, in thoracomelia it is attached to the thorax, and in pyromelia the extra limb is attached to the pelvis. Polymelia of any type can be caused by thalidomide or hormone drugs. The development of extra limbs can be detected as early as four or five weeks into embryonic development. Polymelia can also occur due to the incomplete separation of twins. Surgery can be performed to remove accessory limbs.

5. When the elderly say that they feel like they were a child just yesterday, they are speaking figuratively. Those with progeria, Greek for “prematurely aged,” however, would be saying that quite literally. Progeria is a fatal disease that presents symptoms of aging by the time the patient is two years old. On average, they die of heart disease at age fourteen. Progeria causes accelerated aging in children and is marked by certain physical characteristics. Often people with progeria have prominent eyes, small chins, small noses, and large ears. They also tend to have aged-looking skin, bone and heart problems, and a loss of the fat beneath the skin. Progeria does not affect motor skills or intelligence. Progeria is estimated to be present in approximately 1 in 4-8 million infants. There is no cure for progeria, but there are treatments for symptoms. Exercise and diet changes help with the lipid abnormalities, as well as shoe padding for additional comfort while walking. Multiple heart treatments, depending on the conditions that develop, can be administered. Nitroglycerin is often prescribed. Therapy can help with joints as well. Sunscreen use is advised to avoid skin conditions.

4. People with proteus are truly one in a million. Proteus is a rare overgrowth condition that affects bones, skin, organs, and other tissues. People with proteus often have benign tumors that form. It affects people asymmetrically, meaning that it may not affect both sides of the body in the same way. Veins and blood vessels could be affected as well, and people with Proteus are more susceptible to a certain type of blood clot called DVT. This can cause a pulmonary embolism, which is the most common cause of death in people with Proteus. In certain cases, people with proteus may have an intellectual disability or be prone to seizures. These people are more common to have certain physical characteristics such as a long face, outside corners of eyes that point downward, and wide nostrils.

3. Though we are used to a fictional representation of mermaids, those born with what is called mermaid syndrome do not fit the fishy stereotype. Truly called sirenomelia, the mermaid syndrome is presented when a baby is born with a single lower limb. Sirenomelia is extremely rare, with only 300 cases reported in literature. Of those 300, 15% were one of a pair of identical twins, and 22% were born to mothers with diabetes. It is estimated that sirenomelia is present in about 1 in 60,000 to 100,000 births. It has been reported in all ethnicities, and is more common in males, with a ratio of approximately 2.7:1 males to females. Most with sirenomelia die as infants, but with reconstructive surgery, some have lived as long as young adulthood.Sirenomelia is suspected to be multifactorial, meaning that both genetics and environmental factors may contribute to the condition.

2. Many of us have heard of a cyclops, whether from the Oddessy or another work of literature. It is believed that when these monsters were first written about, they were based loosely on a very rare condition that is now named after them, cyclopia. Cyclopia is diagnosed when someone is born with one central eye or two undivided eyes. Oftentimes, they will not have a nose but will have a similar structure above their eye, instead. It occurs only within 1 in 100,000 people. only occurs sporadically in 1 in 50,000 to 200,000 pregnancies. Whether the twins have polycephaly depends on how completely the twins split, and if they fuse again later. Generally, they are considered two individuals, but they usually share the major organs, and each has control over only half of the limbs. In humans, polycephalic people can have enough coordination to walk, run, and even drive.